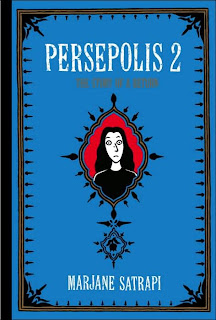 I just finished reading Persepolis 2 by Marjane Satrapi. I'd read the first volume a while back and really liked it, but I just never got around to looking at this one. These two books form a memoir of Satrapi's childhood and early adulthood; she grew up in Iran, then left when the political regime there became too oppressive. There's also a movie based on the memoir, and I am going to watch it as soon as I get myself together. For people who have not read the books and want to start, you can get The Complete Persepolis, which combines the two volumes in one.

Persepolis 2 focuses on the author's adolescence and young adulthood. She goes to Europe to boarding school, then returns home to do other things. As in the first book, the drawings are simple but distinctive, with the color black used to great effect in the robes/head coverings of the women. All that solid black ends up being very imposing/forboding on the page. These two books throughout do a great job of getting rid of the myth that Iranian society is either simple or unified--instead, we are shown varying perspectives on the regime, and varying attitudes toward its religious/moral dictums. The author's family is modern and progressive, very intellectual and very much against the regime--and yet they also love Iran and are proud of its history and traditions even as they grieve for what it has become. This memoir does a great job of showing a complicated relationship to one's homeland, and the author's tumultuous escapes from and returns to it highlight that fact. She has a troubled, difficult adolescence made moreso by the fact that the government of her own country is the most repressive and horrible parent of all.

Anyway, the two volumes together make for a great memoir, and I'm glad to have read it. I wonder if a third volume is forthcoming. I'd recommend that people who believe Iran is unified behind its oppressive policies read it, because Persepolis definitely shows that the reality of the relationship between the citizens and the country is far more complicated than that.
Posted by beth666ann No comments:

Books for the holidays

If you are looking to buy books as gifts this year (and I hope you are) here are some places to check out: 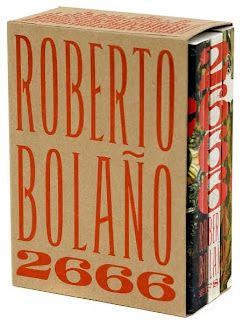 Hello, all: I, Beth, will now also contribute to "will work for books." I'm a freelance copyeditor and a voracious reader, and I'll share some reviews of mine as well as any book-related links I come up with. As for my reading tastes, I like most fiction, history, books about mountain climbing, mystery novels, science fiction, and some dark fantasy stuff. I read graphic novels now and then as well. Right now, I'm hoping to get started on 2666 by Bolano; I'm in the middle of book 1 of Robin Hobb's Farseer trilogy; and I am stalled out (hopefully only temporarily) in Neal Stephenson's Anathem.

Now, for a picture because I am testing this whole thing out. The lovely and cool packaging/design for the pb version of 2666.
Posted by beth666ann 2 comments:

I love this book cover: The Lie Detectors 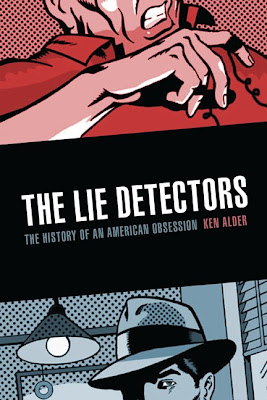 The Lie Detectors: The History of an American Obsession
by Ken Alder
University of Nebraska Press designer Joel Gehringer kindly agreed to share some thoughts on designing this cover:

I have to give a lot of credit to the editors on the design for "The Lie Detectors." After we had tried a number of different concepts, they decided they wanted something evoking the Dick Tracy-esque, pop-art feel of the 1950s, and the paranoia of the era, which plays a big role in the lie detector's history. In that sense, they started me down the path for this one.

Where did you find the images you used?

I went searching for something I thought would fit these concepts and came along some great art at one of our photo services. The artist had a number of fairly basic comic book panels that weren't too exciting on their own - expressions, detectives, cars, faces, that kind of stuff.

How did you arrive at the decision to crop them the way you did?

I realized that with the right framing I could make those images a little more dramatic and get at that nervous paranoia. I think the idea that you can't see the whole face of the man at the top forces the imagination to churn a bit (I added the lie detector devices on the fingers, so now I tend to imagine he's getting nervous because of some tough questions). On the bottom, I cropped a fairly plain image of a smiling detective with a magnifying glass to make him into a more ominous, dangerous-looking figure, maybe an interrogator of some sort. The angles just add to the uneveness, making it less orderly and thus more dramatic.

Email ThisBlogThis!Share to TwitterShare to FacebookShare to Pinterest
Labels: books, design, judging a book by its cover

Books I never buy in print

I generally no longer buy mysteries in print, I only buy them as ebooks. Some exceptions:
Any type of "light reading," actually, I usually buy as ebook only, to be read on my Treo. Some non-mysteries currently on my Treo:

(By the way, I got the idea for this post from the Book Design blog.)
Posted by Jana No comments: