Every year, we spend the last weekend in April celebrating wine, literature, food, music and history with a program of fun events for all ages.

I'm super late posting this (sorry, Cinnamon!), but I don't think it's too late to get in on the action--it starts tomorrow. Check out the Brownville website for the full schedule and info about the authors and musicians.

There's a little more coverage on the UNP blog:

Events include:
- a writers' workshop
- a songwriters' roundtable
- pairing food & wine program
- music by Jumpin' Kate
and much more!
Posted by Jana 1 comment:

Email ThisBlogThis!Share to TwitterShare to FacebookShare to Pinterest
Labels: authors, books, stuff to do, UNP, writers 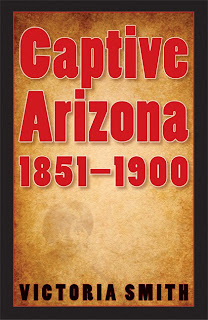 Captivity was endemic in Arizona from the end of the Mexican-American War through its statehood in 1912. The practice crossed cultures: Native Americans, Mexican Americans, Mexicans, and whites kidnapped and held one another captive. Victoria Smith's narrative history of the practice of taking captives in early Arizona shows how this phenomenon held Arizonans of all races in uneasy bondage that chafed social relations during the era. It also maps the social complex that accompanied captivity, a complex that included orphans, childlessness, acculturation, racial constructions, redemption, reintegration, intermarriage, and issues of heredity and environment.

This in-depth work offers an absorbing account of decades of seizure and kidnapping and of the different “captivity systems” operating within Arizona. By focusing on the stories of those taken captive—young women, children, the elderly, and the disabled, all of whom are often missing from southwestern history—Captive Arizona, 1851–1900 complicates and enriches the early social history of Arizona and of the American West.

I've been reading books on expressing and dealing with anger, and this is one of the best ones I've found so far. This book asks a lot of readers. You must be prepared to take many quizzes, do exercises, and think. If you are up to that (or even only part of it, as I was), the book provides a great analysis/discussion of various styles people use in expressing anger. You learn whether you tend to internalize ("anger-in") or externalize ("anger-out") your anger, and then you determine which anger style you tend to use and evaluate how it's working for you. There are primary and secondary anger styles, and all are connected as well to one's communication style. It is acknowledged that you may have more than one style depending on context or situation.

Anger styles that work: the assertive anger style (calmly state your problem, use I-based statements, etc.) or the reflective style (think about it all before moving to assertion). Anger styles that do not work include: aggressive, passive or avoidant, passive-aggressive, and projective-aggressive. YOU KNOW WHO YOU ARE, people--or, if you do not, this book can help you figure it out. I found it illuminating to see the many drawbacks that come of not acknowledging anger. This does not make you un-angry; you just channel the anger into probably not so awesome behaviors and patterns.

The author starts the book with a revealing discussion of her own problems with anger, and I liked her much better for this honesty. It also showed that she was perfectly suited in some ways to write this book.

About all those exercises: she asks you to do lots of reflecting on how anger got/gets expressed in your family of origin, and then how you use it as an adult. Readers are invited to write an anger autobiography; analyze the way anger was handled in one's family and by one's parents; and so forth. The exercises also include the writing of "anger letters" to those who have made you angry. Note: you do not necc. send these. You just try to collect your thoughts in them. Also, the author asks readers to consider forgiveness and apology or "letting it go." She manages to make that sound not stupid or annoying, and I found truth in what she said.

Anger can, Engel points out, motivate us, make us goal-oriented, give us energy and inspiration--or it can make us depressed, resentful, trapped, and immobilized. I found lots of insightful things in this book, though I must confess I was not up to doing the extensive amount of work suggested in the exercises. Perhaps I will go back to it later.

Me = anger-in; tending to the passive aggressive or avoidant; but other times also aggressive, if I know you well enough. Am free, however, to go into rage over smaller things: I might become enraged if the "l" key on my keyboard were not working properly.
Posted by beth666ann 1 comment:

Dear Author did a nice comparison of the currently available iPad eBook apps:


There are several ebook reading applications.  There is no perfect reading app despite the iPad having multiple advantages over eink devices.

I haven't used Kindle on the iPad yet. And I'll continue to not use it if it insists on displaying everything right justified. I've read a little bit on the iBooks app, but not enough to have an opinion on it yet. All I can say is that nothing has annoyed me so far. I'm really waiting for the Barnes and Noble eReader app which, according to Dear Author, is awaiting approval from Apple.
Posted by Jana 1 comment:

Fascinating book about the ethical dilemmas posed by the fact that many of the world's ancient treasures/archaeological finds have been "looted" by other nations, usually Western ones such as the United States, United Kingdom, or France. In the eighteenth and nineteenth centuries, treasures in Greece, Egypt, Italy, and Turkey were taken by either private individuals or museum buyers. France basically ran the department of antiquities in Egypt for years, overseeing the removal of artifacts from Egypt to other countries, and Egypt was not an equal partner in these decisions. Lord Elgin in the United Kingdom simply took the frieze at the top of the Parthenon in Greece. He believed he was saving it. Gilded Age capitalists/philanthropists in the United States used their wealth and power to obtain antiquities overseas to stock the museums they were building back at home.

The countries where these artifacts were originally found (which is not always the same thing as the culture or civilizations that created them) have always had much to say about these practices, but only lately have they been able to make the raiding countries actually respond to them. As a result, the notion of repatriation--the process of returning artifacts to their regions of origin--has been hotly debated for much of the late twentieth and early twenty-first centuries.

In Loot, Waxman considers the issue from the perspective of the various groups who believe it is their mission to maintain and preserve ancient artifacts and cultural heritages: the tourism industry; museums (the Getty, the Met, the Louvre, the British Museum); people in government antiquities departments (such as those of Egypt and Greece); museum curators and directors; and antiquities dealers. Needless to say, these groups cannot agree entirely on anything; their beliefs about the core concepts at stake (history, antiquity, museums, and preservation) are too often in conflict.

Some of the main questions the book addresses are:

1. If the country of origin of an artifact is in disarray and cannot "properly" care for (security wise; preservationwise) its own artifacts/history, does it cede the right to gain (or reclaim) its artifacts?
2. If a museum has artifacts that were obtained using questionable methods, but a hundred years ago or so, to what extent should the museum be public about it? To what extent should the country where the artifact is stored (or the museum) be expected to return the artifact?
3. Who owns objects of art? The region where they were made? The museum where they have been for years? The "human community"? Who should be stewards of them?
4. What should the role of museums be in preserving culture, history, and artwork?

There are no easy answers to these problems, but all parties concerned feel very passionately about the issues. As a result, this book contains lively profiles and memorable stories, and it is very fun to read. (It made me either want to become an art historian or travel.) I had not thought much about the politics surrounding antiquities, or museums, and I liked the way Waxman showed how complicated many of these problems are.


One of the most compelling stories she tells is of the "Lydian Hoard," a group of objects that were obtained under cagey circumstances by the Met. Ultimately, after much agitation from Turkish newspaper writers/activists, the museum agreed to return them to Turkey in the 1980s:

For two years the treasures of the Lydian Hoard were displayed in the Anatolian Civilizations Museum in Ankara, before being transferred in 1995 to Usak, to an aging one-room museum in the town, whose population had grown to one hundred thousand. Not only was the return of the Lydian Hoard a source of undeniable pride in Usak, but it also made restitution a popular cause . . .

But that consciousness didn't translate into broad viewership of the hoard. In 2006 the top culture official in Usak reported that in the previous five years, only 769 people had visited the museum . . .

That was bad enough, but the news soon turned dire. In April 2006 the newspaper Milliyet published another scoop on its front page: the masterpiece of the Lydian Hoard, the golden hippocampus, the artifact that now stood as the symbol of Usak . . . was a fake. The real hippocampus had been stolen from the Usak museum and replaced with a counterfeit.

I can't get this story out of my head. Returned at last, only to be stolen!
Posted by beth666ann 1 comment: