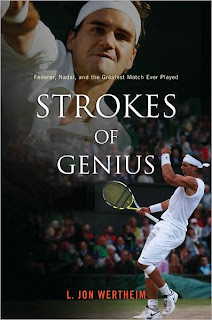 As I watch Jo-Wilfried Tsonga try to beat Juan Monaco at Roland Garros (go Jo-W!!!), I will also talk about the book I just skimmed--OMG BREAK BACK TSONGA AND HE HAS A MATCH POINT. Ahem. So the book I want to mention is Strokes of Genius, by L. Jon Wertheim.

Match point 2! Okay, wow. Seriously good effort from Monaco--but it is not his day! Jo Wilfried Tsonga def. Juan Monaco! Very lovely. Tsonga is so adorable at home in France.

Okay. Wow. The review. First let me just admit that I am a huge fan of Federer. It would not be inaccurate to say I am crazy for him; I love his technique, his precision, the beauty and elegance of his game. I also really love Nadal, but I desperately wanted Federer to win the Wimbledon final last year. Which he did not.

Strokes of Genius discusses that match, now known as (and indicated in the subtitle as) "the "greatest match ever played." In the text, Wertheim combines minute disucssions of the match itself with biographical information about the players, analyses of their games and strengths/weaknesses, and musings about tennis in general. He is a lively writer and the book moves along well.

Okay, I should admit I have to skim the parts that discuss the match. Those are too painful for me still. However, the rest of the work gives great information, and if you are not devastated when Federer loses at a Grand Slam, you will enjoy this book in its entirety. Wertheim had more access to Nadal than Federer; he seems to have had lots of discussions with Nadal's coach, Toni Nadal (his uncle), whereas much of the Fed info and quotes are from already existing pressers and interviews. That said, I do believe he did talk with Federer directly and he seems to have had discussions with his parents and some people who have worked with him. I learned things I did not know about Federer, which is saying something. The Nadal half of the book is more revelatory, however, in my opinion, partic. bec. Nadal has been so close-mouthed about his--well, about everything. Sometimes, Wertheim gets crass (the use of "ass," "zit," and other slang was jarring in tennis writing), but he is very knowledgeable and insightful, and I like his prose. In the end, the book has to kind of be Nadal's as he was the victor of the match, and that's fine. Federer/Nadal is a great rivalry, and Wertheim does a great job of discussing this in detail and making it richer and more resonant.

Anyway, god, I hope Federer does well at Wimbledon even in this (difficult) year for him.

In conclusion, there is only one thing left to say. GO CAVS. DO NOT QUIT.
Posted by beth666ann 1 comment:

I have recently been downloading and listening to audiobooks from Librivox, which is a site that contains audiofiles for works in the public domain that are available for the public (for free) to download and listen to. From what I can tell, you can either download the entire work (if it is complete) in a zip file or receive it in serial form. (For a Victorian novel, this would be ideal, and would perhaps mimic how original readers received the work.) Some of the works at Librivox are already completed; some are ongoing; you can search for only completed works if you prefer. There is a way to access the files through iTunes in case you want to put them on an iPod. That's a huge advantage over my own public library's downloadable audiobook system; the files there cannot be listened to on an iPod.

The wonderful thing about Librivox is the selection: there are many not-so-well-known works, and also some of the most famous. There's also poetry, which is quite nice, and nonfiction as well as fiction. The diversity of the selection is incredible. Again, since these are works in the public domain, they are pre-1923, but since eighteenth- and nineteenth-century novels happen to be some of my favorites, I am fine with this. There are works in German and French (and probably other languages) as well as English. The selection is, as I've said, eclectic. Anyone can volunteer to read!

That last fact also leads to, perhaps, the worst thing about Librivox--anyone can read these books. Sometimes, an individual reader will do an entire work; sometimes, you get a group. I've listened to two works thus far--Anthony Trollope's Barchester Towers, and The Sign of the Four, by Arthur Conan Doyle. Barchester Towers featured many readers. The words "Proudie," "St. Ewolds," and other proper names in the book were pronounced in different ways by different readers. The readers were not all native speakers of English--this is not a problem for me, as I like accents, but it can lead to some interesting mispronunciations (the word "ascertain" was pronounced consistently as "as certain"), and also, because different languages have different rules of intonation and emphasis, sometimes the emotional resonance of the work seems slightly different. This discordance can, paradoxically, lead to a new or better understanding of the work (because you're hearing the words in a way you didn't expect to), and I grew to like all of the readers for BT. There were some truly excellent readers in the bunch, and many okay ones: only one horrible one, though, and she did only one chapter. All in all, I enjoyed the motley crew.

The Sign of the Four was read by a single reader, a Canadian, so I enjoyed her vowels in "about" and suchlike. I did not enjoy her mispronunciation of the name Goethe--she said it so it rhymed with "both", and that set me on edge in the very worst of ways. Still, I listened to the entire book, and she did a mostly fine job with it.

So anyway, I recommend Librivox.org to those of you who enjoy audiobooks, who enjoy things in the public domain, and who are tolerant of readerly eccentricity.
Posted by beth666ann No comments: 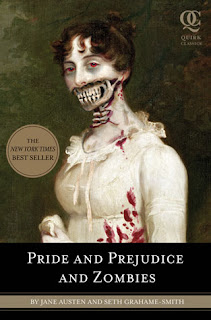 I am incredibly pleased to post this review from one of my real-life and long-time BFFs, Tammy. Especially since I've been so bad at posting lately. I'm also excited to see this review because I have a copy of it waiting for me at the bookstore (I think) along with It Sucked and Then I Cried by Heather Armstrong. Enough about me, though. On to the zombies!

Seth Grahame-Smith’s mash-up novel Pride and Prejudice and Zombies is a lot like finding chocolate in your peanut butter. Never could two more esteemed genres find companionship. The story is, of course, still Jane Austen’s—often verbatim—but with the much appreciated addition of zombies.

In P&P&Z, the sisters Bennet have all been trained in the deadly arts. They spend their days hunting unmentionables and husbands, Bingley is still dreamy and Mr. Darcy intolerable. The parody of manners and civility remain, enhanced with the burden of proper conduct during battle with either zombies or ninjas. Before roundhouse kicks, one must consider modesty. During their visit to Rosings, Elizabeth suffers Mr. Darcy and the unfortunate transition of her dear friend Charlotte:

What remained of Charlotte would liked to have believed this change the effect of love, and the object of that love her friend Eliza. She watched him whenever they were at Rosings, and whenever he came to Hunsford; but without much success, for her thoughts often wandered to other subjects, such as the warm succulent sensation of biting into a fresh brain. Mr. Darcy certainly looked at her friend a great deal, but the expression of that look was disputable. It was an earnest, steadfast gaze, but she often doubted whether there were much admiration in it, and sometimes it seemed nothing but absence of mind. And upon imaging Mr. Darcy’s mind, her thoughts would again turn to the subject of chewing on his salty, cauliflower-like brain.

Who, truly, has not, on occasion, desired a little blood and gore while reading of repression and propriety? Haven’t we all shared Elizabeth’s feelings toward a suitor at one time or another when she “resolved to hold Darcy’s heart, still beating, in her hand…?” Wouldn’t Wharton’s The Age of Innocence be more satisfying if Countess Olenska became a blood sucking vamp, rather than expiring pathetically of tuberculosis?

Grahame-Smith is also a screenwriter, so a movie version cannot be far behind. Spare us Keira Knightly or Gwyneth Paltrow. Give us the girl who always plays the outsider, a Kat Dennings or Eva Amurri. And LET HER KICK ASS!
Posted by Jana No comments: