Detroit 187 and Homicide: Life on the Street

I was a huge fan of Homicide: Life on the Street. A few reviewers have noted that the new show Detroit 187 is very similar to H:LotS. Here are similarites/homages from the pilot alone:

1. Two guys searching for a shell casing in an alley. Joke is that they find many possibilities. This scene appears in both the first and last ep. of H:LotS.

2. Partnership with a young guy and an intense, brilliant, difficult-to-get-along-with older one who doesn't even want a partner. In H:LotS, this was Frank Pembleton (black, genius, veteran) and Tim Bayliss (white, innocent, rookie). Frank's a master interrogator in the Box (interview room). One of the hallmarks of some great H:LotS eps was seeing Frank be brillian in the box--and then later also Tim. We see the Michael Imperioli character being . . . interestign in the box in the new show. Also, the innocent newcomer in the Det. show is a black guy; the hardened genius veteran is the white guy, Michael Imperioli. Det. 187 is more about Imperioli so far, and I'm not sure the new partner will be in future eps. We'll have to see. I do know Imperioli has been given a great role and that I really loved his acting in the pilot.

3. Liutenant Gee, from H:LotS, spoke Italian, was Sicilian. In Det. 187, we have a female sergeant, perhaps also Italian? Have to see more.

4. The board where a record of cases are kept--red for open, black for solved--played a prominent role in H:Lots; camera often went to it for significant moments. In Det. 187, we have a significant board scene at the end. We'll see if they integrate it further.

Det. 187 has a long way to go, but mostly I felt very heartened watching it, and excited to think there might be another great police procedural show out there. We'll see if Det. 187 can do "service" to Detroit the way H:LotS did Baltimore; I know the latter was started by Barry Levinson (Bawlmer native) and was guided from a love of the city. We'll see if Det. has similar lineage/potential.

Fears for the Detroit show: will be too schmaltzy; will shy away from the grittiness. In this show, already, all the cops are basically good looking, probably too much so, and Det., a city in crisis, looked strangely pretty in some scenes. We'll see how it goes.
Posted by beth666ann 2 comments: 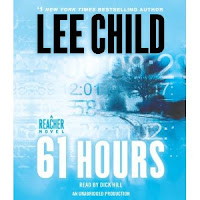 The problem with long-running series is that it's hard to keep them interesting, hard to avoid either becoming so repetitive you're putting people to sleep or so far-fetched it feels as if the characters/plots become unrecognizable. Anyway, Lee Child is a very smart guy and Jack Reacher has remained a very interesting hero, but I had started to feel some series malaise lately. In this book, Child takes Reacher in some unexpected directions psychologically. Maybe it felt too fast or neat in some senses, but I was mostly okay with it, very diverted. Reacher did not sleep with a woman in this book, which I found refreshing; however, he does still go on one of his patented shopping sprees, which I love most dearly. I pray to god in heaven he'll never stop *that.*

I listened to the audiobook for this one. Dick Hill, who I used to like, has lately become hard for me to take. I've noticed he tends to increase volume and decrease the pace of his reading to signify intensity, and to me in this book, it just felt too heavy. Maybe he's gone batty. Maybe I have. I don't know.

I started reading this series around book 9, so I can't claim to have an extensive knowledge of it. I'll start with what I like most, which is the local color/detail about Maine (landscape, clothing, accents, food, etc.). I've been listening to the books and I enjoy Lindsay Ellison's Maine accent a lot. I find the heroine, Jacobia Tiptree, tiresome and not all that bright, and she's impulsive, which drives me crazy as a personality trait because it's so inimical to good home repair or good detective work. The supporting characters are more sympathetic and interesting. I do love the realistic plotline involving Jacobia's son Sam, who battles substance abuse; this is handled very well, because he doesn't *get* well at once; he has relapses, and the incredible every-day difficulty of staying clean is portrayed well. Just wished I found the heroine less annoying--more sensitive, more thoughtful--though she has her moments.
Posted by beth666ann No comments:

I had no idea:

Patroclus rising beside him stabbed his right jawbone,
ramming the spearhead square between his teeth so hard
he hooked him by that spearhead over the chariot-rail,
hoisted, dragged the Trojan out as an angler perched
on a jutting rock ledge drags some fish from the sea,
some noble catch, with line and glittering bronze hook.
So with the spear Patroclus gaffed him off his car,
his mouth gaping round the glittering point
and flipped him down facefirst,
dead as he fell, his life breath blown away.
And next he caught Erylaus closing, lunging in--
he flung a rock and it struck between his eyes
and the man's whole skull split in his heavy helmet,
down the Trojan slammed on the ground, head-down
and courage-shattering Death engulfed his corpse.

That is seriously vivid and yuck, and yet it's got beautiful images. And think--this war lasted ten years!
Posted by beth666ann No comments:

From John Sandford, Dark of the Moon:

"So here's the woman with the fourth-best ass in the state of Minnesota, right in your hometown, and not a bad set of cupcakes, either, from what I could see . . ."

The Sociopath Next Door 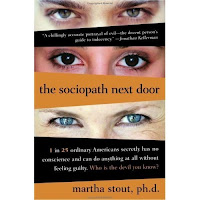 This book investigates the ramifications of the fact that one in every hundred people has no conscience. It discusses how sociopathy might have formed from an evolutionary perspective; it outlines/defines the concept of having a conscience and what it might be like not to have one; it gives a few case studies of functioning (or not) sociopaths in society today; it indicates how to detect them in your own life. The text perhaps comes down a bit heavily on the benefits of conscience, love, and morality, but I can see why (esp. if this book is used as a textbook for colleges, which I imagine it possibly is). In the end, it's far better to be burdened by a surfeit of conscience than to lack one altogether.
Posted by beth666ann No comments:

She and Craig talk about their "bad urges." I can't wait to get her new book (can't believe I don't already have it). Should I get a print copy or ebook? I'm leaning toward the hardcover. I hope I like the jacket.